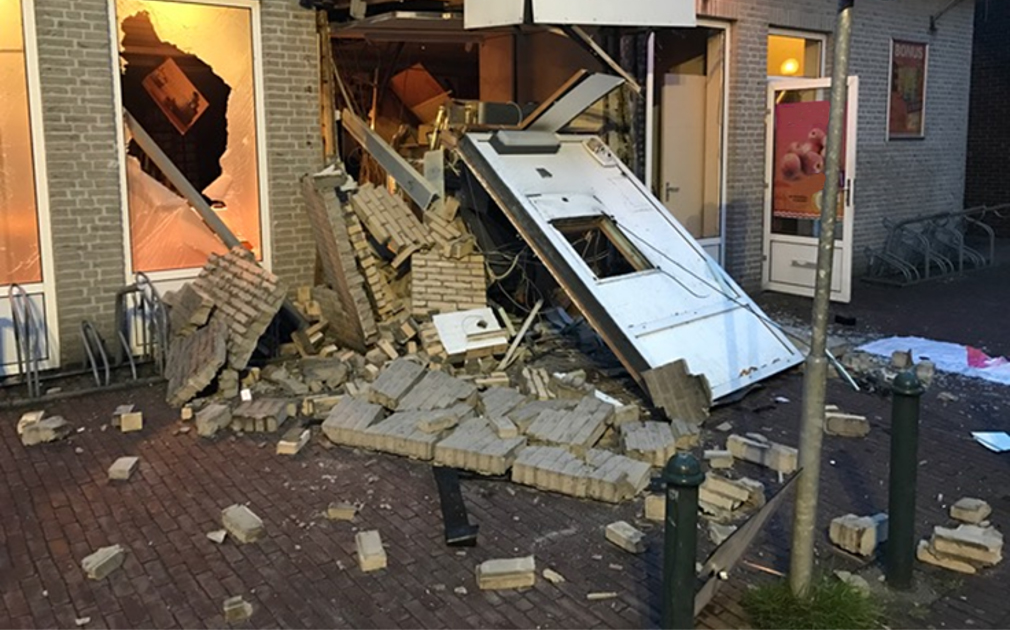 ATMs are a highly attractive target for criminals due to the large volume of cash inside them, easy access and the ubiquity of similar protection measures. For more than 15 years, criminals have used gas or solid explosives to gain access to the cash inside ATMs. What is new, is the rise in the number of explosive attacks, and the speed with which they are spreading.

The scary reality of today, is that the cycle of ATM violence has reached the point at which ATM explosions now seriously jeopardise the safety of the public.

In response to the growing numbers of the attacks, the level of physical protection has been increased, for example, so-called ‘explosive resistant’ safes. However, using stronger safes simply generates a vicious circle of criminals applying more and more explosives.  This results in an even greater risk to public safety.

Why ATM explosive attacks become such a dangerous threat?

When ATMs were first installed back in the 1960s, protection from physical attacks was geared to the only internationally recognised safe standard at that time, UL 291 Level 1. This approved safe design was later copied and offered as the standard ATM safe, resulting in a widespread installed base of UL 291 Level 1 safes globally.

Safe standards have evolved since then to provide more resistance. Some safe designs are still vulnerable to new criminal methods, such as thermal tools and hammers, crowbars, drills or cutting torches. However, all safes have one thing in common. They are all vulnerable to explosive attacks.

The ATM industry has constantly been searching for solutions to the problem but has had no success.

Some of these solutions included additional physical security features such as stronger shutter mechanisms which were added to the ATM to try and prevent the insertion of explosives. Stronger, heavier safes were also used to protect the cash against an explosive blast, and other measures such as smoke screens and CCTV were deployed.

However, criminals are persistent and bring more and more explosives, typically doing a ‘double– knock’ attack to ensure they access the cash inside the ATM. This has resulted in increased collateral damage and an even greater risk to human life.

This highlights just how important it is to addresses the root cause of the escalating problem of ATM explosive attacks and find a route to end this cycle of violence.

Ink-staining systems are used as a defence against explosive attacks because ink serves as a criminal deterrent by ‘spoiling the prize’. There are two types of ink staining systems:

Why is Passive Ink Staining so effective?

Passive ink staining uses game-changing shockwave technology, this is different to all other ink-staining solutions as it does not rely on sensors to detect an explosion and activate the ink.

Some of the benefits of the passive ink staining include:

ATM deployers once believed they had no other alternative than to take ATMs out of locations where explosive attacks could be a serious risk to human lives.

Passive ink staining tackles the persistent and dangerous threat of explosive attacks, breaking the cycle of ATM violence and most importantly reducing the risk to public safety.

TMD Launches Defenses to Protect Cash Inside the ATM and Branch

10 reasons why passive ink-staining is the only effective defence

This website uses cookies to improve your experience while you navigate through the website. Out of these cookies, the cookies that are categorized as necessary are stored on your browser as they are essential for the working of basic functionalities of the website. We also use third-party cookies that help us analyze and understand how you use this website. These cookies will be stored in your browser only with your consent. You also have the option to opt-out of these cookies. But opting out of some of these cookies may have an effect on your browsing experience.
Necessary Always Enabled
Necessary cookies are absolutely essential for the website to function properly. This category only includes cookies that ensures basic functionalities and security features of the website. These cookies do not store any personal information.
Functional
Functional cookies help to perform certain functionalities like sharing the content of the website on social media platforms, collect feedbacks, and other third-party features.
Performance
Performance cookies are used to understand and analyze the key performance indexes of the website which helps in delivering a better user experience for the visitors.
Analytics
Analytical cookies are used to understand how visitors interact with the website. These cookies help provide information on metrics the number of visitors, bounce rate, traffic source, etc.
Advertisement
Advertisement cookies are used to provide visitors with relevant ads and marketing campaigns. These cookies track visitors across websites and collect information to provide customized ads.
Others
Other uncategorized cookies are those that are being analyzed and have not been classified into a category as yet.
Save & Accept